Suffolk County Council is now able to offer a package via Satellite from 1st January 2016 to those households who do not have access to Superfast Broadband and their existing speed of service is less than 2Mb per second.

More details can be found on the links below - which include the background to the scheme, options available to you and the application form for applying for the satellite service.

A full guide to the satellite scheme can be found here

And the application form for this service can be found here

The Fibre To The Premises (FTTP) optical broadband network for residents of Polstead parish on 01787 telephone numbers is now live. This can be checked by entering your phone number here

The FTTP service may be ordered from your preferred Internet Service Provider (ISP). It should be made clear to the ISP, if they are not already aware, that this is FTTP - not the more-usual Fibre To The Cabinet (FTTC) optical broadband, available elsewhere. Note that not all ISPs will supply FTTP.

Around 55% of Suffolk has been upgraded to fibre broadband by commercial operators. However, this left around 45% of Suffolk (mostly rural areas) un-served. To address this, Suffolk County Council established the Suffolk Better Broadband Programme, which has secured public sector funding to raise the 55% commercial coverage up to 85% by Autumn next year. They are currently halfway through this process, having upgraded around 40,000 premises so far.

The map below shows the areas which Better Broadband for Suffolk have confirmed plans to serve with fibre speeds of between 15Mbps and 80Mbps between now and Autumn 2015 - these are marked in orange. The white areas are subject to a minimum commitment of 2Mbps by the end of next year. However the white areas are also being targeted with a second tranche of funding, which aims to extend superfast fibre broadband beyond the 85% already agreed, up towards 95%, eating further into these white areas and giving speeds much greater than 2Mbps. The key date will be in the Autumn of this year, when the second rollout tranche is announced, and we will know how many (and which of) the white areas will now be set for superfast fibre. 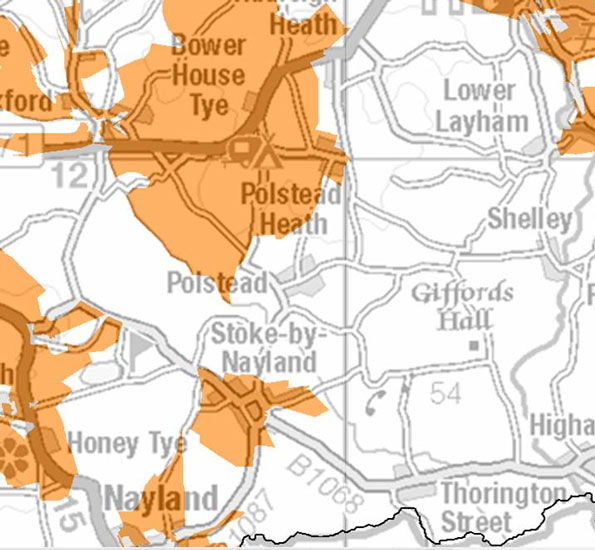 Even beyond the 95% coverage from the second contract, Suffolk remains committed to getting everyone the connection they need.